Skip to content Skip to left sidebar Skip to footer

Head on over to the corner of Sixth & Spruce this Monday evening at 6pm to help inaugurate pedestrian-activated, solar powered crosswalk flashers with Interim Mayor Todd Gloria. The signals are the first of their kind in San Diego. The neighborhood is also celebrating the recent addition of painted “ladder” style crosswalks.

The Bankers Hill Residents Group took the lead on the project with steering committee member, Jim Frost who communicated with city staff to make this improvement a reality. The Uptown Community Parking District funded the project at the request of the Bankers Hill Committee. 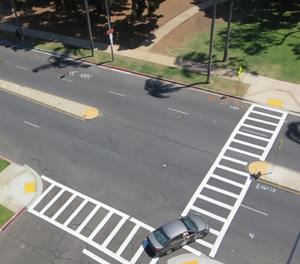 Residents helped out in June (when the city conducted a crossing count) to demonstrate how difficult it is to cross Sixth Avenue at Spruce. The count was key in the neighborhood getting a safer passage to Balboa Park…along with a flashing sign. This intersection connects the community of Bankers Hill, and the area’s largest hotel, with the new children’s playground across the street.

Other neighborhood accomplishments of the Bankers Hill Residents Group are moving towards fruition including stop signs on First Avenue at both Spruce and Juniper. Also, at the request of residents, the City removed a vehicle right turn lane onto Sixth Avenue from the I-5N exit (just before it becomes Elm Street) and added a crosswalk from Bankers Hill into Balboa Park. This group is making things happen.

Everyone is invited to join Todd as he pushes the inaugural button at 6pm on Monday, September 16. The group will then make their way to the top floor of the Inn at the Park where the residents group meets. This month, Senator Marty Block will address neighbors along with a representative from SANDAG who will present the Uptown Bike Corridor routes being proposed for Bankers Hill neighborhood.

* This article taken from Hillquest.com